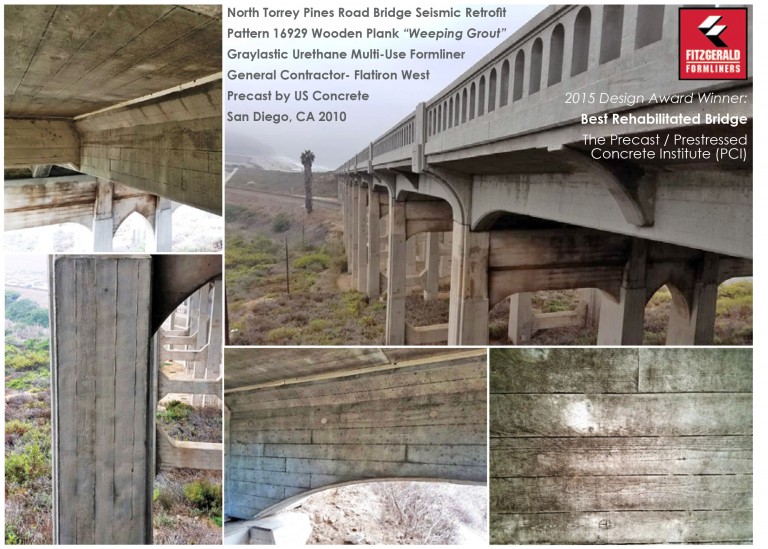 The historic North Torrey Pines Road Bridge was constructed in 1933 in Del Mar, CA located in south San Diego County. Being right on the coastline the structure was subjected to over 70 years of harsh conditions and the salty sea air. The bridge had become extremely corroded and a lot of damage to the infrastructure had occurred over time. The bridge was not structurally sound, and had scored low on seismic and structural stability. In the event of an earthquake the bridge would most likely crumble. A rehabilitation was crucial in order to continue to keep the bridge intact and up to safety standards.

It was important to keep as much of the original look and structure while preserving the historic bridge. The challenge was to keep the aesthetic integrity of the bridge in tact while making it strong enough to withstand an earthquake. The Fitzgerald team visited the bridge and made several impressions using a Poyo putty of the board form pattern used in the original construction of the bridge. Our design team took the impressions to create an identically matching formliner pattern, seen in the photos above.

Full replacement of the superstructure had to be done in order to bring it up to the necessary safety standards to withstand an earthquake. The columns under the road were in pretty bad shape and were corroded, but they were able to be saved. Using precast methods, the wooden plank look was recreated on the columns and the “weeping grout” formliner was a perfect match that preserved the original look of the bridge.

The bridge received a 2015 Design Award for Best Rehabilitated Bridge from The Precast/Prestressed Concrete Institute. Among those who were involved in the project were Oldcastle Precast Inc., the general contractor Flatiron Construction Corp, and the specialty engineering firm responsible for the seismic retrofitting on the project, Kleinfelder San Diego.